forty-eighth Imam (or leader) of the Ismaili sect of lslam, is another landmark of Aswan.         Aga Khan Mausoleum ,is not an historical monument, but it has gained considerable popular cultural appeal.

The late Aga Khan (who claimed direct descent from Fatima, the daughter of the prophet Muhammad), used to visit Aswan every winter and take up residence in his white villa, Nur al-Salaam, situated just above the west bank.

He reputedly buried him self in the hot desert sands as a palliative for his rheumatism. He was so enchanted with the beauty of Aswan that toward the end of his life he expressed the desire to be buried in a spot overlooking his favorite part of the river.

His wife the Begum oversaw the construction of his mausoleum.

It was built in the Fatimid style with a single dome, one of the important innovations in Islamic architecture between the tenth and twelfth centuries.

Constructed of fine rose granite, its inner walls are of marble and inscribed with verses of the Quran.

A small mosque has been incorporated into the structure.

The sarcophagus is carved from Carrara marble from Italy.

Each day a fresh rose is placed on the Aga Khan’s tomb.

When the Begum is in residence in the villa, below the mausoleum, she carries the flower to her husband’s tomb
he self.

This has now been remedied.

The Egyptian government collected the blocks

The Aga Khan Mausoleum is a magnificent structure built to honor one of the greatest men of the modern age.

This mausoleum is a fantastic stop on any tour in the area! Who Was Aga Khan?

The mausoleum has been built in honor of Sultan Mahommed Shah, Aga Khan III.

The mausoleum is located in Aswan.

The Aga Khan was the 48th Imam of the Shia Ismaili Muslims, one of the founders of the All-India Muslim League, and even briefly served as President of the League of Nations in 1937.

Aga Khan was the spiritual leader of the Ismailis, a Shi’ite sect, which mostly developed in India.

Though this spiritual leader died in 1957, his mausoleum still stands and can be seen above the white villa where he once lived.

The Aga Khan mausoleum can be seen even from as far away as the Nile.

Aga Khan III was extremely wealthy. In fact, his people say that on his birthday in the year 1945 he was weighed in diamonds, which he then gave to his followers in a spirit of generosity.

The mausoleum was built according to his wife Yvette Blanche Labrousse’s wishes.

She was also known as Begum Om Habibeh Aga Khan and then eventually given the title Mata Salama.

When Aga Khan knew it was his time to die he decided to build a location for his burial place; it would be somewhere along the West Bank of the Nile River.

When her husband died, she oversaw the construction of the Aga Khan Mausoleum, and finished the project in 16 months with the help of famous architects and contractors. 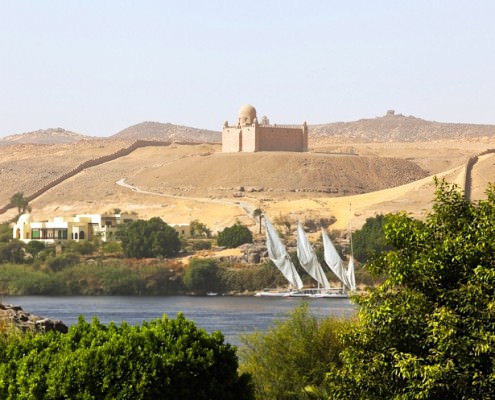 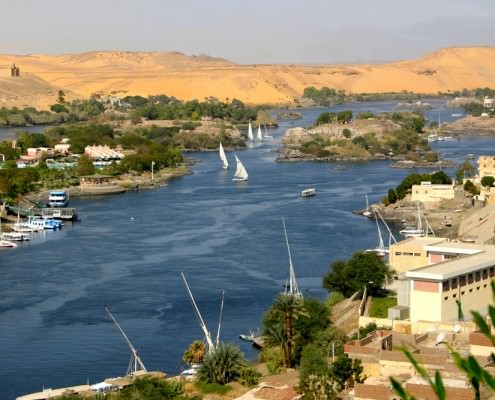 The structure is recognizable by its elegance and by its special use of pink granite and calcareous sandstone.

The interior of the building features light colors and gloriously red carpet that is still regularly maintained.

The entrance to the Aga Khan mausoleum requires a hard climb on a stepped path, followed by an esplanade from which a flight of steps comes up.

Etiquette requires that all visitors keep silent out of respect.

After Aga Khan’s death, his surviving widow continued to leave a red rose on his white Carrara marble tomb.

Living in the villa, she managed to do this faithfully until her own death in 2000.

Even to this day, as per request of Mata Salama, a red rose still finds its way to the sarcophagus.

Always check for available times and tours in Aswan to see if and when the Aga Khan Mausoleum is opened to the public.

This is one of the grandest and most romantic sites on all of Lower Egypt so make plans to purchase an Egypt tour that includes the Aga Khan Mausoleum.